Volkswagen has officially launched the ID.4 all-electric SUV, with VW describing it as an “all rounder”.

The Volkswagen ID.4 is a compact SUV and is the second fully electric vehicle from the German carmaker to be built on its MEB platform, following the launch of the ID.3.

While both cars are being manufactured at the company’s Zwickau plant initially, the ID.4 is a global launch into the most popular car segment right now – the compact SUV.

What you need to know?

UK pricing has not been announced yet, but in Germany prices for the ID.4 1st Edition will start from €49,950.

Charging will take about 10 hours from empty to full on a dedicated 7.4kW home charge point .

Access a public rapid charger and you can expect an 80% recharge in around 30 minutes. The ID.4 will be able to charge at a max rate of 125kW DC, so that means you can take advantage of the growing network of rapid chargers that are capable of 100kW.

The ID.4 shares a lot of the same design cues as the ID.3. It is minimalist in appearance, with very few buttons. Instead, a touchscreen interface dominates the centre console while the driver is also presented with a digital cockpit display.

Volkswagen says the ID.4 will have the spacious feel of a much larger SUV, thanks to the long wheelbase, even though this is technically a compact SUV, similar in size to the Kia e-Niro.

On the exterior, you can certainly see the similarities with the ID.3 particularly from the front.

VW itself describes the ID.4 as an “emotional all-rounder”, so it needs to tick quite a few boxes.

The ID.4 has a length of 4.58 metres, which slightly longer than the 4.3m of the Kia e-Niro, which the ID.4 is likely to compete with in this segment.

The long wheelbase helps contribute to a tight turning circle of 10.2m and helps keep the interior roomy.

Boot space is competitive too, with 543 litres when the rear seats are up. If you fold them down though, capacity increases to 1,575 litres. This compares to 451 litres in the Kia e-Niro or 1,405 litres with the seats down. 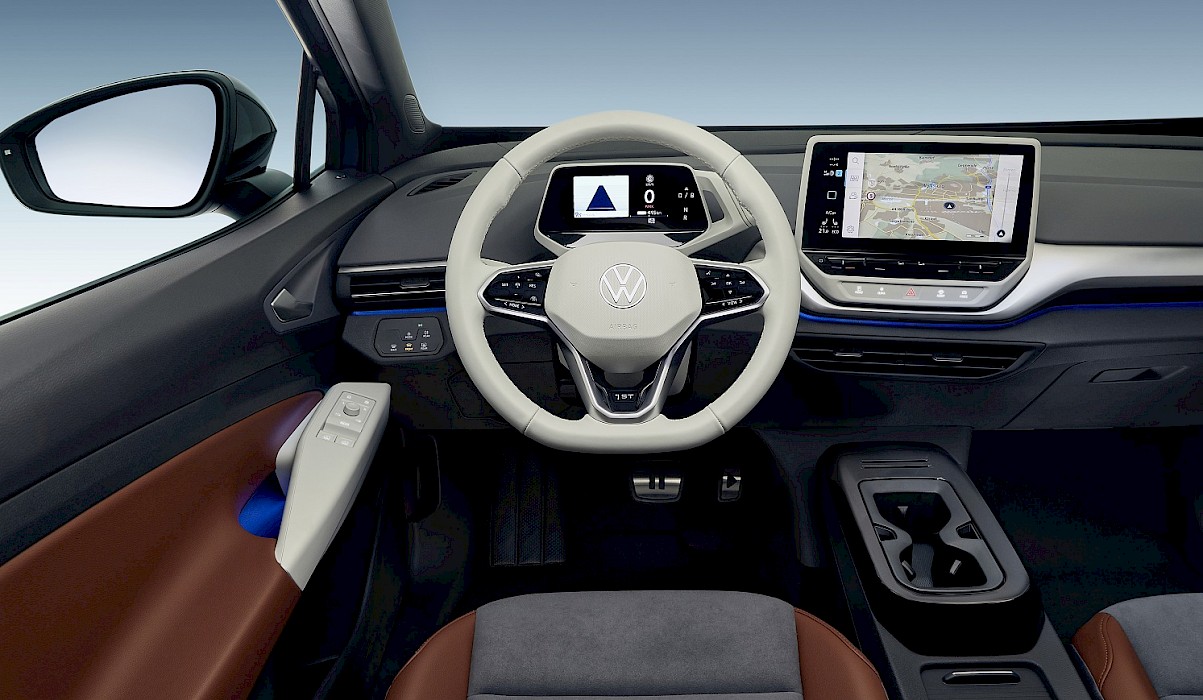 There will actually be two First Edition models – the ID.4 1st and ID.4 1st Max.

The standard 1st edition will come with 20-inch wheels and tinted windows at the rear, while the interior includes heated front seats and steering wheel and the background lighting can be set to 30 different colours.

Drivers will be pleased to know a heat pump is also fitted as standard which means heating and cooling of the cabin is much more efficient and should ensure the range is not affected too much if you have the air-con on full blast.

There’s also a heated windscreen for the cold mornings which you can remotely start from the smartphone app, so no need to sit waiting for the screen to demist.

In terms of tech, sat-nav is included as standard, and you’ll also find four USB ports for charging your phone and other gadgets. Rear cameras come as standard to assist with parking.

There is a 12-inch touchscreen which houses the infotainment system and most other controls. The driver is also presented with another digital display called the “ID Cockpit”.

Voice control is included as standard and is activated by saying “Hello ID”. Voice control systems are notoriously inconsistent, with some manufacturers being much better than others. It remains to be seen how good it is, but if you don’t want to keep repeating voice commands then there is also gesture control, so you can keep flailing your arms about instead.

You also can proudly display the fact you were an early adopter because the “1st” logo will be on show on the steering wheel.

The 1st Max gets the same features as the standard 1st edition, with a few upgrades. For example, you get slightly bigger 21-inch wheels, 3D LED tail light clusters, as well as a panoramic glass roof, electrically operated boot lid and electrically adjustable seats.

In addition to the two screens you get in the standard 1st edition, drivers of the 1st Max will get an augmented reality head-up display.

Prices for the 1st Max edition €59,950, although UK prices have not yet been confirmed.

Additional models of the ID.4 will launch in 2021 with, predictably, fewer features and a smaller battery pack to help bring the cost down.