The top 10 UK cities most prepared for electric vehicles

New research has identified the UK cities that are most and least prepared for the rise in popularity of electric vehicles (EVs).

The figures, revealed by renewable energy supplier Tonik Energy, compared the number of full driving license holders in each UK postcode area to the number of publicly available charging points. The location of the charging points were identified using Zap-Map to help determine which areas of the UK had the most public chargers per driving license holder.

Sunderland was found to be the most prepared city in the rankings, with its 87 available charging points equating to 1,460 license holders per charger. The rest of the top three was completed with Milton Keynes (1,487) and Dundee (1,635) following closely behind.

At the other end of the spectrum, Portsmouth was found to be city least ready for the impending rise of EVs on the roads, with just 16 public charging points available to cater for the more than half a million drivers in the PO postcode area – this works out at about one charger per 32,288 license holders.

“With the cost of electric vehicles falling all the time and the rise in UK residents wanting to make their lives as ethical and eco-friendly as possible, we are already noticing a significant rise in attention towards EVs. Given the estimation that the cost of running an EV will match that of a standard car in the next couple of years, we only envisage demand to rise further.

“Local councils must be prepared for the increase in the amount of EVs on our roads. One of the main barriers to purchasing one of these vehicles is the fear of running out of charge on a long journey so it’s crucial that all councils, particularly those towards the bottom of these rankings, recognise the need to invest in publicly available charging points.”

"The UK charging point infrastructure is growing at a rapid rate with more than 12,000 devices now on the public network. A record 900 new devices were added to Zap-Map last month alone; providing a great mix of on-street residential chargers, destination chargers and en-route rapid chargers - necessary to support the day-to-day urban driving as well as longer electric journeys.

“Whilst some cities such as Sunderland, Milton Keynes and Dundee have really embraced the shift to zero emission cars, there is still some work to be done in other locations to provide electric car drivers with the charging infrastructure they need."

One city that has already seen a huge increase in electric vehicle ownership is Brighton, where it has more than doubled in the past two years alone.

Tom Kiss, Founder at Electric Brighton, an initiative created to promote the use of EVs in the city, adds:

“Lots of drivers are beginning to understand the benefits of driving an EV and are considering the switch. But, it's a big decision to make and anyone thinking about switching needs to have assurances that there will be somewhere to charge their car regularly. It's a little bit chicken and egg scenario: people may not want to buy an electric car if they can't charge close to home, but local authorities and EV charging companies need to know where the demand is.

“This data has proved extremely helpful for Brighton & Hove Council, as this year they will be installing over 200 on-street lamp post chargers following their successful bid to OLEV for £300,000.”

The top ten most prepared cities - based on the number of license holders per charger - were as follows:

The top ten least prepared cities - based on the number of license holders per charger - were as follows: 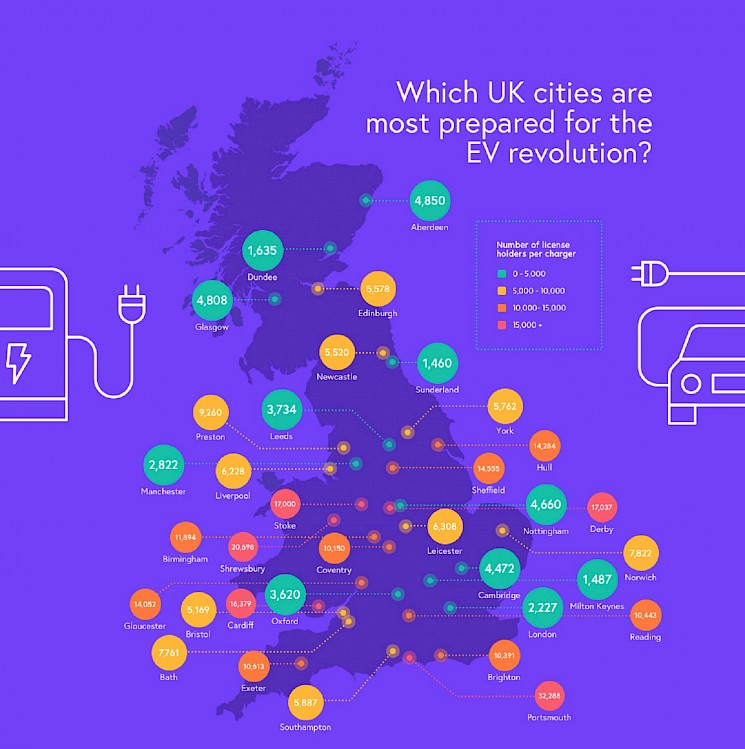