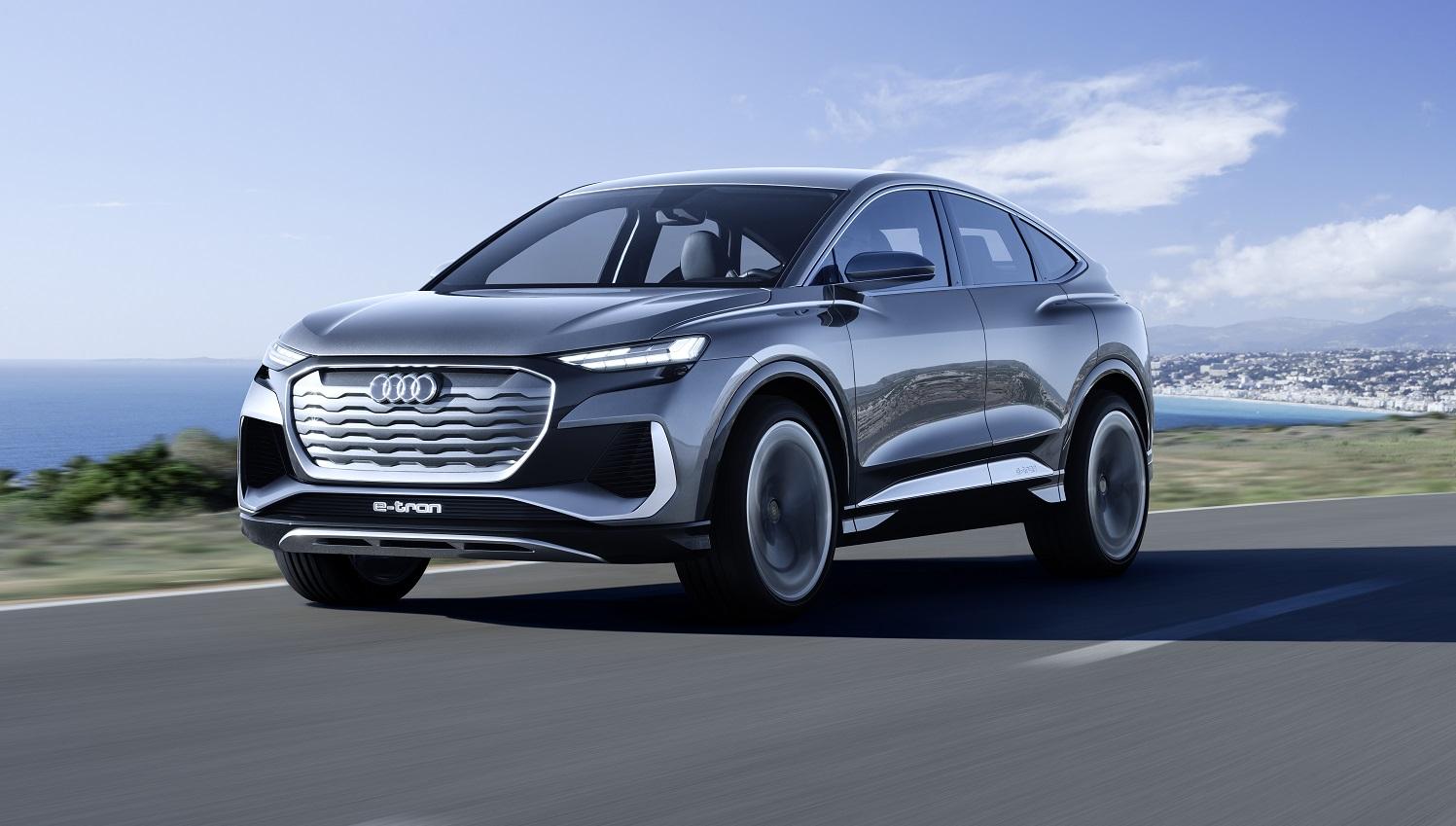 Audi has revealed details and images of its Q4 Sportback e-tron concept, which will be the basis for a production model in 2021.

The Q4 e-tron concept had already been previewed in 2019, so the new Sportback concept is joining that line-up.

Audi offers the sloping Sportback look on its Q3 and e-tron range and it appears that the upcoming electric Q4 will get the same options – pure SUV or Sportback SUV.

Obviously the silhouette of the Q4 Sportback sets it apart from the standard Q4. The coupe-like roof and back end are obviously present.

From certain angles, the Q4 Sportback e-tron concept has a touch of the Tesla Model X about it so it will be interesting to see what exterior tweaks are made for the production version – if any.

Both Q4 e-tron concepts share the illuminated e-tron logo at the rear, while the large sweeping LED lights are something shared across the e-tron range.

On the front, there is, of course, no radiator grille present as an electric car doesn’t need one. Quite often the biggest telltale sign of an electric car, Audi has retained a somewhat traditional look on the front, but look closer and you’ll see the “grille” is completely closed.

The Sportback is a little different size-wise – it’s the same 1.9m width and 2.77m wheelbase as the normal Q4 e-tron concept, but it’s one centimetre longer overall and one centimetre lower. 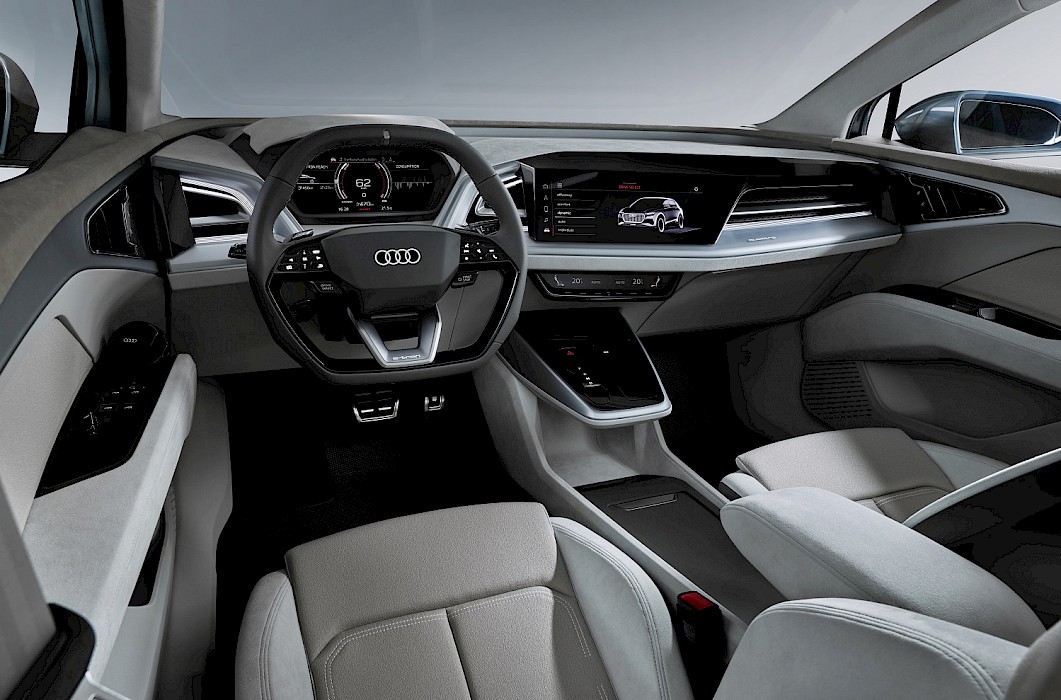 Being an SUV, this is obviously quite a big car. The lack of a transmission tunnel means passengers in the back benefit from a completely flat floor, so you should get three adults in much more comfortably.

The designers of the concept say the colour scheme of the concept emphasises the sense of space, combining light, warm colours for the upper section of the cabin with contrasting dark carpet.

Drivers will benefit from the excellent Audi virtual cockpit behind the steering wheel, but if that wasn’t enough then a large heads-up display with augmented reality function will also give you crucial driving information.

And if that wasn’t enough either, there’s also a 12.3-inch touchscreen tilted towards the driver. This is a nice touch and while use of the touchscreen should be avoided as much as possible while driving, if you do need to use it then it’s nice it’s angled towards the person who actually needs it.

Interestingly, the floor covering is made up of recycled materials which is in theme with the more environmentally friendly nature of this electric car.

Adding to the feeling of space, there is no need for traditional gear selection so this is replaced with storage for your phone or other bits and pieces.

Understandably, Audi hasn’t mentioned if the sloping roof of the Sportback affects headroom in the back. It’s possible, but we’ll have to wait until 2021 when we see it in the metal. 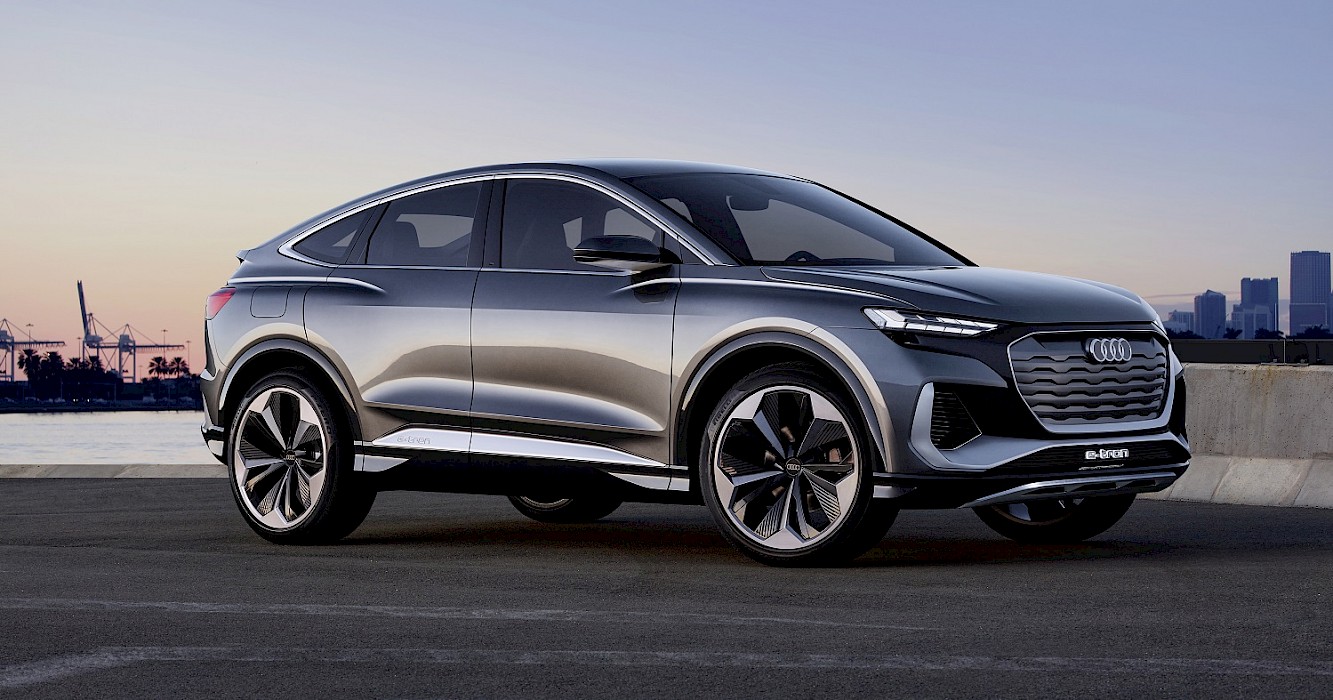 In the all-wheel drive version, the rear and front axles have their own electric motor – so you get the full Quattro experience.

In fact, because there is no mechanical connection between the axles, it means the torque is delivered exactly when and where it is needed in a fraction of a second.

Combined the two electric motors deliver a peak torque of 460Nm. The car is available with up to 306hp and will do 0-62mph in 6.3 seconds.

During a normal drive, only the rear motor will be used to improve efficiency, but when you need extra performance (or traction) then the front motor will kick in.

Using a standard 7.4kW home charge point, the Audi Q4 Sportback concept will take around 11 hours to charge from empty to full, although most of the time you’ll just be recouping the miles you’ve used that day, so it should be much quicker.

But if you need a super quick charge for a journey that’s over the range of 279 miles, then this Audi is capable of up to 125kW DC rapid charging – that means an 80% recharge in around 30 minutes.

There’s no details on the price just yet or exactly when it will go on sale.